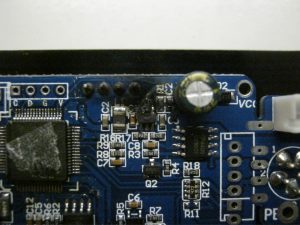 Intermezzo, when I was about to make some photos for the menu, I switched on this new soldering controller and it released the magic smoke. It worked fine earlier today. I wasn’t planning to do a repair, but well, it seems it turned out we need one. The part that has burned out is designated U2. This appears to be a switching regulator… why did it release the magic smoke? I measure a short (2Ω-ish) between the 3.3V and GND rail, but is this the cause or the result of the failure?
See this tread EEVBlog Forums for the schematics.

Before I will even attempt to lift the part, for which I would need to connect another solder iron controller, I need to verify the cause of the failure is not my power supply. Does it supply the required 24 volts, or has it gone bad, blowing up that regulator? According to the multimeter my 24 volt socket outputs a nice 24,21 Volt, so that is the intended voltage. No problem there, so the problem must lie within that new soldering iron. 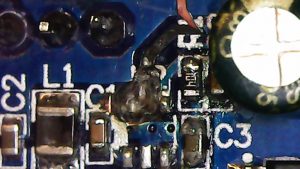 So with that out of the way, let’s desolder that burned chip. After removing it, it seems to have burned a hole in the PCB. That must have been some fireworks. I would appreciate it my electronics don’t do this new-years thing. When unmounting it, I also removed the RTC battery from the microcontroller. What is revealed was a microcontroller with the where the print was sanded out. So they do not want us to know what part they’ve used. Probably some STM32 clone part. We’ll look at that later, as now, there is still that short. Well… where is that damn short?

I have cut some tracks that, from visual inspection, should separate the power regulator part from the rest of the board. But it seems the short is elsewhere. If the part of the board where the DC-DC converted used to sit was the problem, I could inject a 3.3 Volts from an external board.
Lift every component that has both a 3v3 and GND connection? What am I supposed to do? Can the EEPROM or the microcontroller be the problem? If the microcontroller is fried, well then getting a replacement will have to wait a year or so, as the silicon crisis still continues, It would be cheaper to order some more controllers.

So at this point it seems unfruitfull to try to continue fixing it. So I might want to continue on the still working one, but now I am a bit weary to switch that one on. And that is the thing with the slow display. When powering it up, and having to wait several seconds before something shows up, doesn’t alert me of trouble when flipping the switch. I am used to waiting, and so, seeing nothing on the screen didn’t make me suspicious something was wrong, until I saw the smoke.